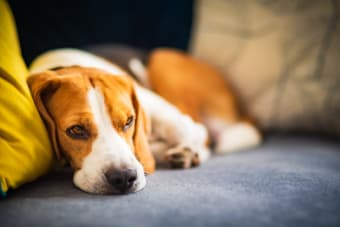 Heartworm is no joke, this serious condition can cause heart failure, lung disease, severe organ damage, or even death for pets infested with the elusive parasites. Dogs and cats are both potential hosts for heartworms, though the former are at greater risk from the parasite. In this post, our Sacramento vets espouse the virtues of preventive medicine against heartworms and similar parasites.

Heartworm disease is spread through mosquito bites and is primarily caused by a parasitic worm called dirofilaria immitis.

Pets including dogs and cats are capable of becoming definitive hosts, where the worms live inside, mature into adults, mate, and produce offspring to repeat the cycle inside the animal. Infestation by dirofilaria immitis is typically called heartworm disease because the worms set up camp in the heart, lungs, and blood vessels of an infected pet.

The most common symptoms of heartworm disease include swollen abdomen, coughing, fatigue, weight loss, and difficulty breathing. Symptoms of heartworm disease typically don't appear until the disease is advanced, however, with the worms having had months to wreak havoc on your pet's internal systems. This is why it is best to prevent heartworms in the first place, as much of their danger is undetectable before irreversible damage might have been inflicted.

Your vet can complete blood tests to detect heartworm proteins (antigens), which are released into the animal's bloodstream. Heartworm proteins can't be detected until about five months (at the earliest) after an animal is bitten by an infected mosquito.

The Prognosis for Cats and Dogs with Heartworms

Topical FDA-approved solutions are also available. These can help to get rid of parasites in the bloodstream when applied directly to the animal's skin.

Heartworm prevention is safer, easier, and much more affordable than treating the progressed disease. A number of heartworm preventive medications can also help protect against other parasites such as hookworms, whipworms, and roundworms.

Is your pet exhibiting signs of heartworm disease? Contact our vets straight away for examination. If you would like to protect your pet from the dangerous parasite, we offer affordable preventive medication, schedule an appointment today to see what option is right for your pet.

Elkhorn-Walerga Animal Hospital is accepting new patients! Our experienced vets are passionate about the health of Sacramento companion animals. Get in touch today to book your pet's first appointment.